You are here: Home / Featured / TARDISnail Vs 2Dis – Doctor Who: Flatline Review 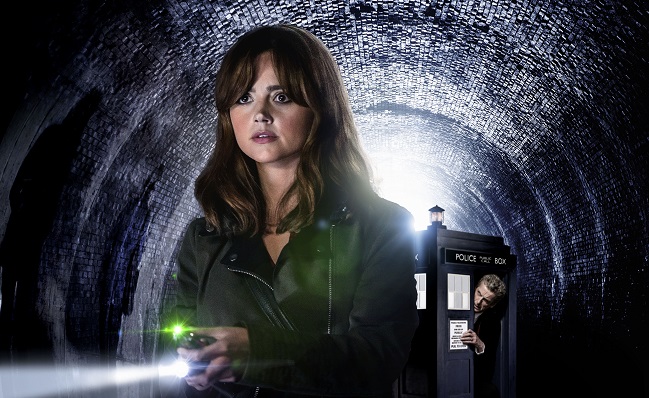 This week on Doctor Who: we’re on a council estate, running away from mysterious monsters with the help of plucky locals and silly humour! To be honest, I half expected Rose and Mickey to dash out from behind a bin and say hi.

That didn’t happen, though. Instead, the Doctor got locked inside the TARDIS before he could follow Clara through the door, leaving the companion to function as the Doctor outside while our grumpy hero advised/heckled her via an earpiece. For those of you who feel this series has been more about Clara than the Doc, this episode probably won’t change your mind. She even gets her own pseudo-Companion in the form of Rigsy, who puts in a good showing.

Clara herself has undergone a lot of development since last year, when she was introduced as a Charming But Generic Companion Figure. She thinks, she processes her role, she grapples with increasingly bad relationship decisions, which surely have to bite her hard in the upcoming series finale.

As well as Doctor/sidekick gymnastics, the bad guys this week possessed a memorable 2D gimmick which was realised with considerable onscreen gymnastics. The dissolving sofa and the 2D train were my personal favourites, but there were some lovely effects moments all through this episode.

It also allowed the Doctor to create the 2DIS, a device for making 2-dimensional objects 3D again, which is an amazing pun. I’d say it was my favourite iteration of the TARDIS in this episode, if not for the trainline moment later on, when the TARDIS becomes a snail-shell on the back of Thing from Addams Family. Along with the Doc’s constant one-liners whilst trapped in his box, the comedy in this episode also really lands.

So does the ongoing storyarc stuff, actually – one thing they’ve done better this year than the previous couple of years is build the Missy story arc in a way that gives us interesting teases of the concept, without overpowering the episodes in question. As long as it doesn’t fall apart at the very end, we’re all good.

Is the good a Doctor man?

Admittedly, the Doctor’s final line – in which he comments that being “good” and “the Doctor” are not necessarily the same thing – doesn’t hit quite as smoothly. Yes, Clara had to make a few quick ethical decisions, but nothing which really made me suck in air and think she was turning dark. I get that “Is the Doctor a good man?” is a theme this year, but not sure they nailed the tie-in.

Still, that’s one line in a mostly very strong, enjoyable, fast-moving episode. Capaldi and Coleman are both on good form, and I look forward to more. It’s also worth noting that new-to-Who writer Jamie Mathieson wrote both this episode and last week’s Mummy extravaganza, both of which were very entertaining, resonant episodes. Looking forward to more from him in the future.

And looking forward to the remaining episodes in Doctor Who series eight, in fact. If they keep up the quality, this could be their best series since the first Matt Smith year, and that’s great to see.

See the trailer for next week here.