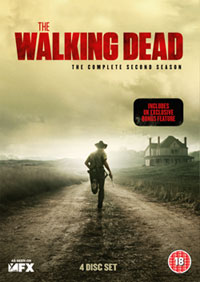 After finally airing on terrestrial Channel Five, The Walking Dead season 2 is out in DVD next Monday. You’ve probably seen the episodes by now if you’re a fan, but how do they hold up as a unit? Are there any special features worth seeing?

Well, we’ve had an early look at the boxset, so let’s take a look. Is this worth a purchase, or is it… an utter shambles? (Sorry.)

I already reviewed the thirteen episodes individually, so check those out if you want detailed thoughts on every plot twist. As a whole, though, it’s a mixed bag. This season got a bad reputation for being boring, especially in the middle third as the ”search for Sophia” storyline dragged on into infinity, but it does have an okay start and a real pick-up at the end.

I’m trying my best to avoid revealing plot details for the most part, as if you’re considering buying the boxset you might not have seen it. Again, full spoilers available in my individual reviews. But in my considered opinion it just about pulls together by the climax, although there are at least four or five episodes where, yes, not a lot happens except angst-ridden arguing and an impotent zombie encounter.

I’m not that concerned with DVD bonuses, so I am surprised to admit the extras with The Walking Dead season 2 are decent. There are featurettes clearly made with the DVD in mind, allowing full discussion of later plot points, rather than the lazy approach of just recycling promo material from the start of the season, where they can’t actually say anything. (Although there is some of that too.)

For fellow fan of the comics, there is a particularly good one where creator Robert Kirkman discusses how they’ve approached the adaptation. In fact, for fans on a budget, you can see that featurette at this link. And they’re all a good length rather than outstaying their welcome too.

There were rumours of behind the scenes turmoil, which predictably aren’t explicitly tackled – fired exec producer Frank Darabont is never mentioned. Included in the deleted scenes, though, is a chunk of a discarded first episode, a lengthy bit of plot that never made it to the screen. It’s just a curio, ultimately, but more interesting than the inane dialogue snippits on many DVD set extras.

So, in summation, the episodes themselves are patchy at times, but as a package, this is pretty good. If you like The Walking Dead, there is plenty of fleshy material to get your teeth into here. A nice warm-up for the oncoming (and exciting-looking) third season.