You are here: Home / Film + TV / Top of the Pops night and Rhod Gilbert’s Work Experience: What We’ve Been Watching 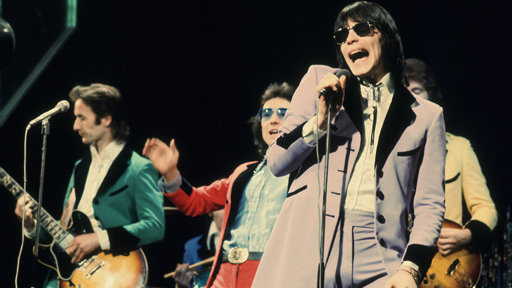 BBC Four indulged in a real nostalgia-fest last Friday with its Top of the Pops night, consisting of clips, documentaries and even a full episode from 1st April 1976. You might say it’s easy programming that just relies on the warm, fuzzy feeling generated by nothing more than the reaction “naww, I remember that.” Still — it was a heck of a lot of fun.

First up was simply an hour and a half of great music. Big Hits: TOTP 1964 to 1975 offered just what it said on the tin; clip after clip of memorable performances from a time when 7.30pm on a Thursday evening meant just one thing: plonking yourself on the sofa for half an hour in the company of the Hit Parade.

The Kinks, Queen, Stevie Wonder, Suzi Quattro, Abba, The Rolling Stones, The Supremes… this was the sort of show that made you fall into that most clichéd of traps: “oh, the recent past was so much better than the present.”

Luckily, we were quickly put right by the screening of a full episode of Top of the Pops from 1976, which unequivocally proved that there has always been rubbish, it’s just that the rubbish doesn’t tend to make the neatly edited clips packages.

Still, it was genuinely fascinating to see the programme in its entirety, with a God-awful performance to Jungle Rock from Pans People nestled beside archive footage of The Beatles and studio performances from Sailor and — number 1 that week — Brotherhood of Man.

And, as an added bonus, if like the rest of the Twitter community you were keeping on eye on your feed as you watched, you may also have caught the rather wonderful trivia nugget that proto-Goldfrapp outfit Fox’s lead singer Noosha Fox is Bad Science writer Ben Goldacre’s mum. Which is brilliant.

“I’ve got hands like a snooker referee, not a farmer.” It’s lines like this that make Rhod Gilbert’s Work Experience much more fun than it has any right to be. The premise is slight — brilliant Welsh comic Rhod Gilbert tries a ‘proper’ job for a while and… well, that’s it. But he’s funny and as such, it’s enjoyable.

Sometimes the reality is quite far removed from the voice-over though — Rhod modestly pushes the ‘aren’t I rubbish’ line, but generally he’s fine at the jobs he tries. Never was this more apparent than in an episode from first series when he tried his hand at being a single mum; he attempted to portray himself as grumpy and bad with kids, but we all saw with our own eyes that the little ‘uns found him hilarious and gave him hugs at every available opportunity. Naww.

Admittedly, he fared less well this week with dairy cows as he worked on a farm for a few days, with the sheer amount of, to put it as delicately as I can, excrement taking him by surprise. He gave it a good go though, milking the cows, leading a cattle auction and even visiting an abattoir to make sure he had a rounded view of what being a farmer really means.

Hands dirty, skills learned and — at times — eyes well and truly moistened, Rhod very quickly found himself rather fond of the country way of life. It’s not revolutionary telly by any means, but it’s a pretty lovely way to spend thirty minutes.

Next week, Channel 4 puts it faith in “the people that brought us Green Wing” with a full series for Campus.