You are here: Home / Gadgetry / The final conclusion: Apple or Android? The iPhone vs HTC Legend 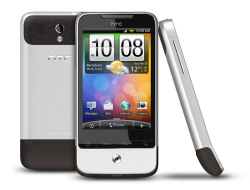 Following on from last week’s post (Apple or Android? The iPhone vs HTC Legend), I’ve had time to ruminate over my transition, and having given the Legend back a week or so ago, I’ve had time to miss the things that I actually grew to kind of love.

For instance, as much as I love the clean layout of the iPhone, it was useful to be able to sprinkle apps and widgets about, dedicating one page to the apps I used most regularly, one to favourite contacts and one to a calendar overview. It’s a different way of working to the iPhone, but one I found I enjoyed.

I loved Spotify. I really liked the maps, and the addition of a compass which my old skool iPhone lacked (you can’t imagine how gratifying it is not to have to spin in circles on the pavement, trying to work out which direction was which).

But as much as I wanted to, I did not love Android.

My conclusion is that Android is still for early adopters. The marketplace is incredibly disorganised, and lacks the sleek standardisation that Apple’s draconian rules result in. The apps themselves were wildly varying in quality, which is something most app stores suffer from. However, this was highlighted in the Android store by certain apps that promised to do one thing, and once downloaded would just direct you to an advert – just when you thought spamming had nowhere else to go.

The Legend, however, I would be all over if it magically started running the iPhone OS: good to hold, super-bright screen, and fast – ohsofast — compared to my sluggish iPhone 3G. So that’s what I’m pushing for in the inevitable June iPhone announcement — simply a partnership and HTC to bring me the new phone of my dreams. Fingers crossed, eh?