You are here: Home / Craft / Make Claire’s cowl from the Outlander trailer 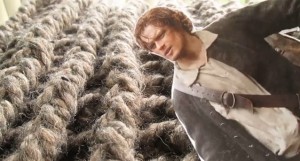 Outlander, a historical/fantasy/romance drama series based on the books by Diana Gabaldon, has yet to make it over to the UK (get on it, Channel 4!). But it’s already been a success in the States, with Starz (the channel on which it airs) ordering a second series (based on the second book in the Outlander series).

If you’re as excited as me and can’t wait until Outlander gets a UK air date, I’ve got just the thing to keep you busy until then. Get out your chunkiest knitting needles (and thickest crochet hook) and get to work on recreating main character Claire’s (the titular Outlander, played by Caitriona Balfe)  gorgeous cowl from the series trailer with these free patterns.

Ravelry user Polly Foo Foo designed both a knitted version and a crochet version of Claire’s cowl. As I mentioned, it requires super bulky wool (she recommends Lion Brand Wool-Ease® Thick & Quick®, although I reckon Sirdar Big Softie would work too) and, depending on whether you knit or crochet, either a 15.00 mm hook or 25 mm needles.

Despite the size of it, the knitting pattern is incredibly simple. All you need to know is how to knit with two strands together, and how to do a basic garter stitch (which is knit stitch all the way, without any purling). It is as straightforward as that, and it produces a cowl so fantastically chunky, you’ll be warm all winter. 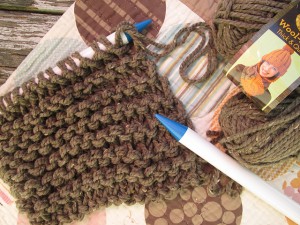 The crochet pattern is perhaps a bit more difficult (it is to me, as I’m not really a crochet person) but if you know your way with a hook it’ll be as straightforward as the knitted version. It’s worked in the round as a tube, and you can start with either a traditional chain or a foundation double crochet, depending on your comfort level. Again, the result looks deliciously warm and comfortable – ideal for cold Scottish nights (also ideal for cold Scottish nights: cuddling up to your own Jamie Fraser).

I’m a big fan of chunky knits. The yarn knits up very quickly, and watching your piece grow at a rate of knots is immensely satisfying. So I’ll definitely be having a go at the knitting pattern… once I get my hands on some 25 mm needles, that is!

Meanwhile, I truly hope that Outlander makes it to the UK really soon. And if you want a glimpse of what I’m talking about (and not to mention, a glimpse of that cowl) the trailer for the series is below.

Check our craft tag here – have a go at making Katniss Everdeen’s cowl from The Hunger Games: Catching Fire