You are here: Home / Kids / gNappies – Reusable nappies for parents in a hurry 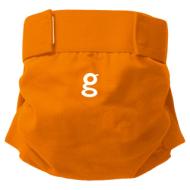 With my first baby I was a guilt-ridden eco-worrier, dutifully using the Bambino Mios to help reduce my carbon guilt at my selfish decision to increase the burden on the planet with yet another human.

This time around, I got the resuables ready to go and there they have stayed.

But then I got sent some gNappies and suddenly I’m salving my carbon guilt without having to find room on the airer for hundreds of cotton napkins.

The outer wrap comes with a fitted, breathable, plastic inner that you can unclip when you wash the fabric pants. It acts as a waterproof barrier and provides an elasticated gutter that guards against leaks. The disposable pad (think: giant sanitary pad) slots inside. 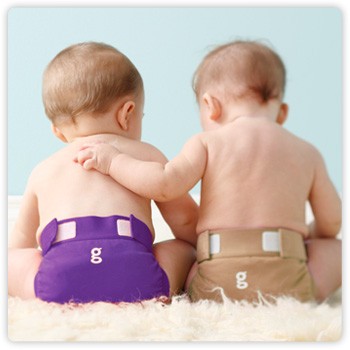 The gNappies system is so much easier than faffing with nappy liners and wraps. It feels like having the convenience of disposables with the benefits of reusables.

The disposable part is smaller than a normal nappy, which means there is less to throw away. The pads are also biodegradable and compostable.

The nappies aren’t bulky like a lot of reusables. The wraps (or gPants) are really nicely designed – although it takes a while to get used to the fact that they do up back-to-front. However, they were quite tight across the enormous thigh of my chunky baby, leaving red lines when I had them done up as tightly as I’d do a normal nappy.

It’s a shame that the inserts are quite expensive in comparison to disposables (although you can get the gCloth, reusable inserts if you want to save money). But disposables are the third largest contributor to landfill (according to gNappies) and these inserts biodegrade in just 50-150 days in garden compost (although, you should only compost the wet ones, not the pooey ones).

Not everyone will be able to put them on compost and decomposing matter on landfill is yet another thing to fret over, but there’s no plastic involved in the disposable pads, which are made from wood fluff pulp, sodium polyacrylate (super absorber) and cellulose rayon. Now we just need rayon to be produced more sustainably and we won’t have to feel quite so guilty (so long as you stick your fingers in your ears and go la la la over ** NSFW Doug Stanhope NSFW **)

gNappies are on offer on Ocado until 30th June.