You are here: Home / Featured / The NCT doesn’t do a postnatal course, but if they did, this is what they should teach new parents

WARNING: DO NOT READ THIS IF YOU HAVEN’T HAD A BABY YET* 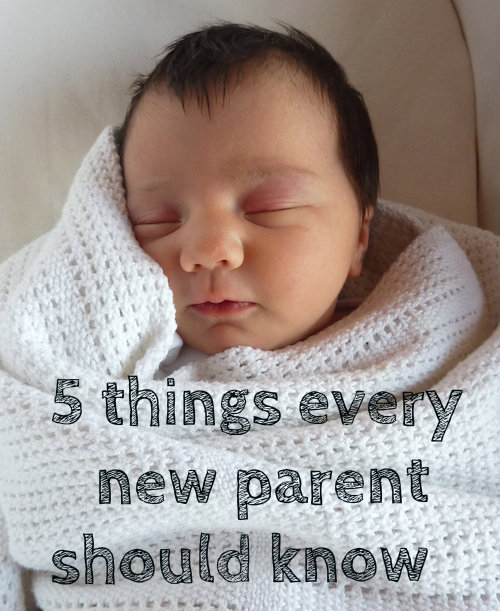 Picture the scene. You’ve had your baby. You’re slowly recovering from the fact that the NCT poster birth you’d been expecting was not As Advertised. Your private area feels like it’s been in a road traffic accident. It’s starting to dawn on you that no one has troubled to explain to you how you’re ever going to take a poo again. And you have a small human living in your house who seems to be making regular demands on your time.

It’s at that moment you realise that you’re not really as prepared for all this as you should be.

Now, there are plenty of reasons why the NCT (National Childbirth Trust) and their ilk don’t add in a “how to actually care for your baby” session as part of their antenatal course (aside from giving you some pictures of normal poo and giving you the lowdown on topping and tailing). For starters you’ll be too busy reeling from the news that an episiotomy is a Thing that Exists and questioning your involvement in this whole process. Plus, the NCT already gets enough flak for giving parents so much information that they start to convince themselves that a natural birth after a peaceful, candle-lit, eight-hour labour is a basic human right (which it should be, of course. Can someone look into that please).

But while I accept that many parents might be furious, or offended, or patronised, or possibly just mildly put out at being taught to care for a newborn, I really do think Someone should be offering a basic “These are some really helpful things everyone should know” bit in the antenatal classes.

So being the good sort I am, I decided to be that Someone – and to hell with the consequences.

Obviously I’m not clever enough to actually tell anyone how to effectively care for a child. After all, my definition of a successful day with my children is one in which no one died. But thanks to sleepless nights spent wandering lost and bedraggled across the internet like Cathy on the moors, as well as links from friends who also mistakenly believed that if we just found enough lifehacks we could totally Win at newborns, I’ve now got a digital pack of Things That Will Really Make Life Easier.

Things Every New Parent Should Learn in the First Week

Feel free to add in your own suggestions. Or get cross about something you think is outrageous. Although, personally, with a teething 18-month-old and a four-year-old who summons us in in the night to locate the teddy that is lying RIGHT NEXT TO HER, I’m so exhausted that I can barely cook up a fury about anything. Unless my husband’s left a dripping wet cloth in the sink, of course. But that kind of crime would make Ghandi sweat.

You can also, of course, leave your tearful thanks. To which I can only say, you’re very welcome. And remember: this newborn bit will pass quick as a winky and you’ll only be able to recall about 5% of it. Which is no kind of solace at all when you’ve got thrush in your nipples and weird globules of red goop keep sliding past your stitches and into your knickers every time you get up.

The Ultimate Post-Natal guide for parents of Newborns

1. Dunstan’s Baby Language – by Priscella, queen of the Dunstan

I’ve mentioned this one before, but I feel fairly evangelical about it.

Every parent should be given a video and cheat sheet of this in their Bounty Packs. It basically teaches you the different cries that babies do and tells you what each one means. The ones I found the most useful were Neh! Which means “Oi Milk lady! Food!” and “Eh” and “Eair” which mean “burp me” and “I need to pass wind” respectively.

It takes a while to learn to hear the different sounds. I only noticed the “Owh” – “I’m tired” – cry with the second one. Mainly because I’d forgotten that by the end of the day, the thing you start to become convinced is the mythological colic is actually just over-stimulated baby meltdown.

Some people say their baby didn’t obey the crying noise rules, but I reckon the vast majority of babies will give you a “neh” when they need grub.

But be warned, if you master it, you will find it really hard not to tell random strangers, friends, and people who would rather you kept your sticky beak out of it thank you very much, that their baby actually wants to go to sleep when they are burping it to within an inch of its life.

2. Timeline of a breast-fed baby. 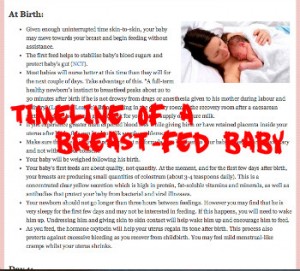 If you’re planning on nursing your baby yourself, this is a REALLY handy step by step guide to what to expect. Things change so quickly that it’s hard to keep track of what’s going on.

This guide is really reassuring, mentioning things like Nursing Strike (which I didn’t know about the first time) and Block Feeding to reduce engorgement issues.

Thanks to The Alpha Parent for putting together such a comprehensive guide! I send this to every new mother I know who is trying to breastfeed.

I printed off Noob Mumm’s E.A.S.Y Schedule cheat sheat and stared at it regularly with my second one (trying to concentrate on even basic information like this in the first few days reminds me of the time I accidentally ate a hash cookie before going on a long train journey and had to read a timetable to work out what platform my connecting train left from at Birmingham New Street. It’s a miracle I ever made it home). 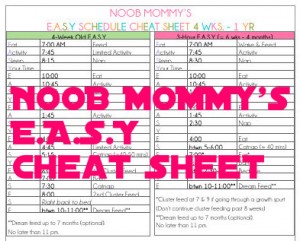 I didn’t use the newborn section initially because my second baby was incredibly sleepy. But once they start having what my mother calls “wakey time” this is invaluable.

I thought that I would be a fairly hippyish, no routine type mother. But it turns out, I’m so disorganised that if I went that route, there’s a risk my children would be constantly hangry.

Even if you go the baby-led approach the whole way, it’s helpful to know 1. around how many hours your baby needs to sleep, 2. how much food your baby should be having and, 3. how to spot when your baby needs both of those things.

Which leads me on to: 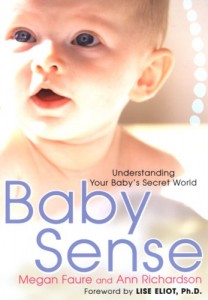 One of the things people like to slag poor, old, misunderstood Gina off for is that she tells you not to make eye contact with your baby when you’re trying to get it to sleep (this is the bit where Mumsnetters call me a Nazi, right?). But there are plenty of gaze-averse Hollywood stars out there who would insist that withholding eye contact is NOT tantamount to abuse.

In a world where your universe is made up of blurry, black and white faces who tend to get all up in your business, having relatives, friends, parents and old ladies at the bus stop constantly chattering on and trying to get you to look at them is pretty exhausting.

This book helps you work out when your baby actually wants to be left to sleep. It will make you so aware of those moments that you’ll want to start to tell people to stop making eye contact with your child. Like you’re Tom Cruise’s manager or something.

This blog post from Secrets of Baby Behaviour also gives you the basics of baby body language.

4. The Shushing Man – The Happiest Baby on the Block

This one is a bit of a wildcard for me. I didn’t find out about it until after my second was too old for it, but I love its lifehacky vibe. Basically, Dr Harvey Karp (warning: this website contains Comic Sans) wants you to combine all the soothing techniques you use into one Soothing Power Move.

It’s pretty persuasive and I would certainly give it a try. My friend said it worked for her every time.

The only thing is, if you watch the video knowing Dunstan’s Baby Language, you’ll see that they pacify a baby who is clearly saying “neh” to be fed. So while it may well work, it might also have you neutralising a noisy infant who just wants to tell you something important.

(Also, as always when watching a clip of Richard & Judy I have to question what Richard has been smoking.)

5. How to do the Aussie Swaddle

My NCT teacher taught us how to do a standard swaddle using a normal flat blanket, but knowing this alternative would have been really helpful.

Every baby is different, which is why learning an alternative swaddling technique is so useful. This one is perfect for babies that like to suck their hands.

There are lots of other alternative methods out there too. Definitely worth exploring before you give up because swaddling really is great – plus the babies look like cute little maggots.

How to do the Aussie Swaddle – written guide with pictures

How to do the Aussie Swaddle (video)

Special Bonus: 6. All the lyrics to Hush, Little Baby 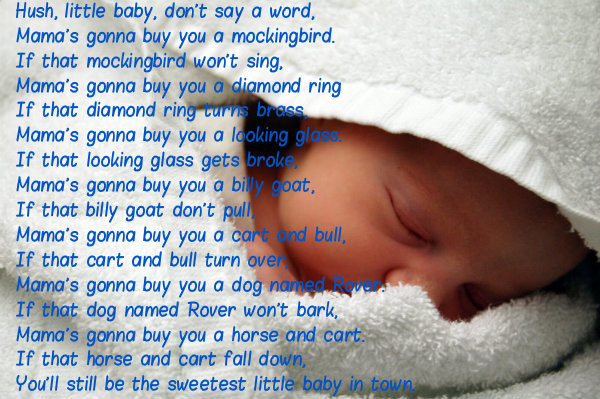 It’s only when you start singing lullabies to your child that you realise just how hazy you are on the actual words to most of them.

The joy of Hush, Little Baby is that it’s really long and really easy to sing. So you can let your mind wander off into the void whilst appearing on the surface to be a tender, nurturing parent.

Plus, it teaches your child about capitalism, bribery, suppression of emotion and mistreatment of animals early on.

I feel like someone wasn’t trying their best with that Rover verse.

I also like to make up my own words as I go along, just to try to keep my brain from totally atrophying. It hasn’t worked so far.

So that’s it. Those are the things that I think every parent should be taught before the consultant wheels in the ventouse and starts brandishing a pair of scissors.

What are the things that you think we don’t get taught before the baby arrives? Together we can make the ultimate post-natal parenting course.

*It’s important we maintain this culture of silence around the really grim things that happen or no woman would ever agree to gestate anything ever again.

[Update: Of COURSE the NCT do a postnatal course. Silly me. But I bet they don’t teach the baby shushing technique.]