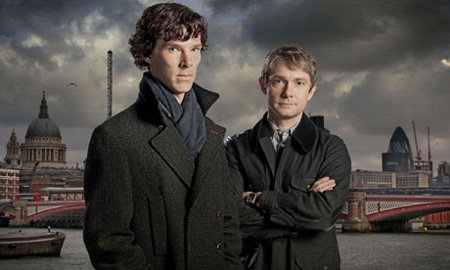 The short, intense affair of Sherlock came to an end on Sunday. After the first episode, we all threw an internet parade and someone at the Beeb announced excitedly that a new series was coming. Then the second episode happened, everyone was a bit disillusioned and that BBC source must have been wondering if they’d be swallowing a grenade.

Fortunately, the final third of the series picked it up, brought back some of that quirk that we all loved at the beginning and added a bit of fresh intensity. Stuff blew up, people died and Holmes shot a wall several times.

The mystery draws to a close

In short, this had the smell of series finale all over it. To be precise, an opening part of a series finale. The fact that there isn’t a second part next week is thus a little frustrating, but only because the end was so dramatic.

I will admit that there is something odd about being thrown into the obvious climax of an episodic show that only started a fortnight ago. It would probably have helped if the plotlines and characters being tied up had been mentioned in the middle chunk of the run.

But the up-side of Sherlock episodes having epic ninety minute runtimes is that there was plenty of space in this episode to build the storyline. And it cleverly gave Sherlock ample chance to show off his deductive brain and personality defects.

The villain makes himself known

Also, perhaps because it was written by Mark Gatiss rather Doctor Who chief Steven Moffat, the main character didn’t seem as much like Matt Smith’s Eleventh Doctor as he has done. Still a lot like Doctor House, but that’s understandable.

Whereas his arch enemy Moriarty did not resemble the Master. It would have been fun to see a huge twist in which the big villain turned out to be the chief of police or Sherlock’s brother, but in lieu of that, he had a decent intro. It rather depends how the next episode continues things.

So after last week’s slightly underwhelming batch, this was a genuine return to form for me. More fun visual touches and on-screen text, a more entertainingly OTT plot, much more charisma and banter from Cumberbatch and Freeman. It felt like a strong sequel to a good movie, with the middle episode perhaps some kind of DVD extra.