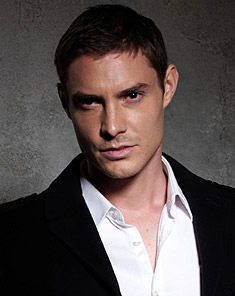 It’s time for “Protect the peace talks”, a Spooks plot that dates back to the dark ages. It exists in many forms, including “Protect the state visit” and “Protect the sensitive meeting”, but the point is that some international occasion happens in London, so our MI5 heroes are pressed into working as event security.

This is certainly a rendition of a horary old formula, but at least it’s the first time this series, and there are repeated hints that the messianic President Obama might be involved. So, how was it? Did it live up to previous outings? Are the rumours true about Dimitri finally getting something to do?

Part and parcel of these stories is at least one member of the Spooks team going undercover at the event itself, and here Beth and Dimitri both get shoved in there. Presumably, as in all workplaces, MI5 give the tasks no-one else wants to the new kids.

This is probably Dimitri’s first really major role in an episode, and actor Max Brown milks it. There’s even a brief moment where it looks like he might do the full James Bond and seduce a female negotiator, but sadly he doesn’t get time. I allowed myself an indulgent chuckle when Harry confirmed that Dimitri’s main character trait is “habitual good cheer”, since I said that in my last Spooks review.

The plot itself has enough twists to stop me being bored, although they may seem familiar to long-time Spooks viewers. Part of me wishes they’d try a bit harder to surprise us. Also, even by their standards, this episode has some improbable seeming moments. I’ll refrain from describing them, as they spoil the climax, but I found myself sceptical at least twice.

Yes, I know it’s not a documentary.

Meanwhile, the Lucas North soap opera storyline… takes a week off, for the most part. Our hero gets to focus on being heroic, although based on the trailer for next week, it looks like this was his last chance to do that before a subplot explodes all over his face.

In short, this was a watchable episode, although didn’t contain much Spooks hasn’t done before, repeatedly. The sense of genuine threat was minimal and, despite multiple hints, Obama did not appear onscreen. So perhaps it was a little unremarkable. But if you’re following Spooks anyway, it’s definitely worth watching on BBC iPlayer, and commenting below if anything leaps out at you.