You are here: Home / Film + TV / Five movies to see at your cinema this summer 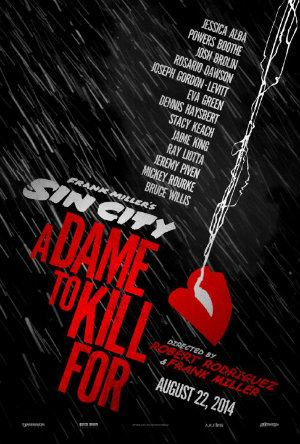 It’s officially blockbuster season at your local cinema (and other cinemas as well, obviously), so hurrah! Film fans rejoice! Last year, the summer movie schedules were filled to the brim with apocalypses of various degrees (and Alan Partridge trying to be a hostage negotiator). This year, the schedule’s a bit more low key, presumably to prepare us for the epic goodness that 2015 will bring to our screens.

Still, we’ve got a couple of heavy hitters coming our way, including a deadly dame, a colony of damn, dirty apes and… a talking raccoon? Really?

Guardians of the Galaxy

Yes, really. The last Marvel Cinematic Universe film before next year’s Avengers: Age of Ultron, Guardians of the Galaxy definitely sounds like Marvel’s riskiest movie yet. Taking a relatively unknown property, which features amongst its main characters said talking raccoon (Rocket Raccoon, voiced by Bradley Cooper), an assassin (Gamora, played by Avatar‘s Zoe Saldana) and a tree-like humanoid with a very limited vocabulary (Groot, voiced by Vin Diesel, of all people), Guardians could well be the big hit of the summer.

Look out for future cinema golden boy Chris Pratt (of Parks and Recreation fame) as main man Peter Quill. Or, as he’ll happily tell you himself: “Star-Lord, man! Legendary outlaw!”

Guardians of the Galaxy is out on July 31st.

Tammy might not be a direct shoe-in for box office smash of the summer, but that doesn’t mean you should give it a wide berth. Especially if you’re a fan of Melissa McCarthy, who should be worshipped because she is funny as hell.

Tammy’s had, to put it lightly, a bit of a bad day. After totalling her old banger of a car, losing her terrible job and finding her husband in bed with her neighbour, she (understandably) wants to leg it and escape for a while. The only problem is that she’s not got her car or the cash to do so with. And the only other option, which is hitching her ride with her grandmother, Pearl, doesn’t really seem like the right way to go.

Bonus points to the trailer for its excellent usage of that beautiful nineties classic, Gangsta’s Paradise by Coolio.

Sin City: A Dame to Kill For

Nine years after the storming, hard-as-nails original, the roads to (Ba)Sin City are open once more. In this long awaited sequel, primarily based on Frank Miller’s second book in the Sin City comics/graphic novels series, we get a mix of both old and new, with two original stories (The Long Bad Night and The Fat Loss) complimenting two stories from the comic books (the titular A Dame to Kill For and Just Another Saturday Night).

I’m a bit biased towards this movie, considering that I was a massive fan of the first Sin City. So it’s good to see that, judging from the trailers, the visual style and grit is still very much in place, only amplified by a hundred. And with an ensemble cast that strong (the likes of Eva Green and Joseph Gordon-Levitt join returning cast members such as Jessica Alba and Mickey Rourke), this could be well worth the nine year wait…

Sin City: A Dame to Kill For hits the cinemas on August 25th – or catch it earlier at FilmFour FrightFest on August 23rd (if you’re not at home watching the Doctor Who premier).

Dawn of the Planet of the Apes

The sequel to 2011’s surprise smash Rise of the Planet of the Apes, Dawn takes place a decade after the devastating events at the end of the last movie. With society divided into survivors of the simian flu virus and the fast evolving nation of apes, one of the survivors – Malcolm, played by Jason Clarke – seeks to establish contact with the apes, and their leader Caesar (Andy Serkis, back on mo-cap duties).

Rise of the Planet of the Apes did an admirable job in rebooting a franchise which seemed a bit lost (after Tim Burton’s Planet of the Apes in 2001, of which we shall not speak). Dawn seems to continue the trend, and with a third part already in the works, Caesar’s reign has only just begun…

Bow to Caesar and go and watch Dawn of the Planet of the Apes, in cinemas on July 17th.

How To Train Your Dragon 2

Come on, who the heck is not excited for this one? The sequel to 2010’s How To Train your Dragon picks up five years after the first movie. Jay Baruchel is back as an older, wiser Hiccup, who is being pressed by his father to take over his duties as the chieftain of Berk. But the discovery of an ice cave, home to countless new wild dragons – not to mention a mysterious rider called Valka – puts Hiccup, Toothless and Astrid in the centre of a devastating conflict, involving a menacing madman called Drago Bludvist.

Already praised by critics, and doing that rare thing where a sequel actually builds upon the first movie, How To Train Your Dragon 2 is one for not just the kids, but for everyone.

How To Train Your Dragon 2 is in cinemas from July 11th.

Which movies are you raring to see this summer? Tell us in the comments.