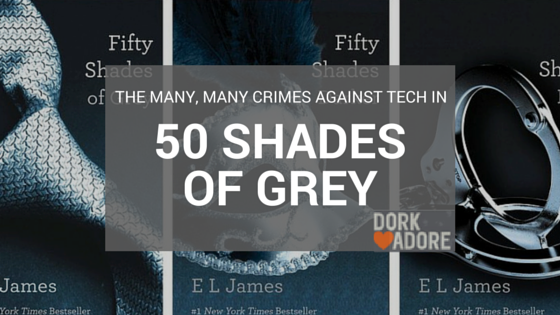 If you have recently suffered the trauma of reading all the books in the 50 Shades of Grey trilogy back-to-back, you may need — as I did — to work off some of the self-loathing with a cathartic read of the 50 Shades of Suck blog from start to finish (I cried more than Ana after a session in the Playroom thanks to the laughter therapy this blog provided).

Without even mentioning the sex, there are PLENTY of things I could list that are wrong about this book, including its sentences, its plot, the fact that the all-American heroes talk like Sloanes, the tedium of listening to Anastastia witter on about her emotional turmoil while her “inner goddess” and her “sub-conscious” go to war, Christian Grey’s endless smirking, and the entire cast’s TERRIBLE taste in clothes, music and humour.

But this is a geek website. So I figured I should leave that stuff to others and simply talk tech.

Our hero, Anastasia Steele, is 21 (despite having the mental age of a 12-year-old) and living in the 21st century. And yet she doesn’t own a phone that can access email, she doesn’t possess a computer or laptop, she doesn’t use Facebook, and she doesn’t have a music player.

She doesn’t even own an email address.

This is not possible. I know a technologically backward 21-year-old, so they definitely exist, but she still owns a laptop, an HTC phone, a digital camera and an email address. When I say she’s backward I mean she never uses Facebook and she wouldn’t know what Tumblr was if it came up and hit her in the face with a hilarious gif. But she can still use Google and can edit video on her Macbook.

Because she’s a 21-year-old living in the 21st Century.

We are asked to suspend our disbelief many times throughout the trilogy. Ana only has two friends? Fine. Ana has an orgasm any time Christian bellows “come!” at her? If you insist. Ana can go for days at a time without eating? Ana by name, ana by nature. Ana knows how to use a tampon? Unlikely, but we’ll go with it.

But when Christian gives Ana an Apple laptop (or “mean machine” as Ana calls it) that isn’t in the shops yet, I threw my ebook reader gently across the table in disgust.

Let’s get this straight, Apple doesn’t care WHO you are, you can queue up outside the Apple Store to buy the latest Macbook like every other fanboy. Even if you do have the civility of Christian Grey.

As 50 Shades of Suck rightly points out, EL James is just phoning it in by the end, with pages and pages of email “banter” between Christian “we aim to please” Grey and Ana “Twinings tea, bag out” Steele.

But as anyone who has ever sent an email will tell you, only someone who is entirely INSANE would change the subject header every time they sent an email. Especially on a BlackBerry. I’m still replying to friends with email subject headers that stopped making sense two years ago.

You’d have to be nutso. Like 50 shades of nutso to spend all that time changing your subject headers. And don’t get me started on the ever-changing auto-signatures.

What is it that Ana Steele can’t grasp about her email being monitored? Does she *really* not understand that company email is not the place to discuss light whipping and nipple clamps? How hard is it for her to just create a Gmail account like every other human on earth?

Apparently, this only recently de-flowered graduate (who’s made it through university without making more than two friends or getting drunk once) can be totally blasé about her pornographic work emails being read.

For someone who gets so upset when Christian is rude enough to buy her an Audi and upgrade her to first class, she seems fine with making his tech guy spend the afternoon deleting her filth from the company servers.

Despite being a total moron when it comes to technology, Ana manages to set her phone to forward all calls to her BlackBerry. But when she and Christian have a tiff, she hands over her tech and gives up the BlackBerry. It takes her about a week to work out why no one has called on her old mobile (although maybe that’s because she only has two friends and one of them tried to date-rape her, Dios Mio!).

How she managed to change her ringtone for Christian to Sade’s “Your Love is King” (a song that 100% of students in a recent poll had NEVER HEARD OF*) is anyone’s guess.

Honestly, it’s enough to make me want to spank someone pink with my mini-disc player.

*I made that up, but it’s still TRUE.