You are here: Home / Kids / My First Digital Music Player from BabyZoo 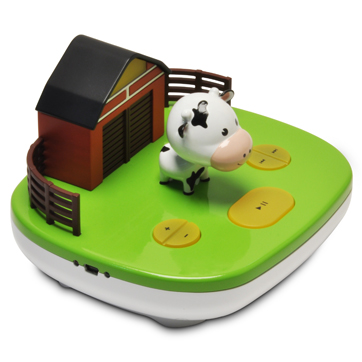 If you’re going to design a music player for very young children, the least you can do is make it look like a farmyard with a cow attached.

That’s certainly the attitude the designers over at BabyZoo have taken, and we heartily approve here at Dork Adore.

The BabyZoo Coco Music player (or Moosic player, as I’ve taken to hilariously calling it) has been created for babies and very young children to use. You plug in a USB key loaded with MP3s and your little ones can play tunes, skip tracks and crank up the volume on their favourite not-at-all-annoying kiddie songs.

It’s got a nightlight that you can switch on and off. You can also set the music so that it plays continuously, plays for 30 minutes, or goes off after 10 minutes depending on how strong your resistance to the Best of Black Lace is (the nightlight goes off when the music does).

There are other settings including a volume control (so you can restrict it to a quieter mode even if your little darlings crank it up loud) and a shuffle setting.

My two-and-a-half-year-old loved the Coco music player from the first moment she saw it. It’s been something of a constant companion, accompanying her to the bathroom, into her cot and keeping her occupied first thing in the morning when I’m trying to listen to Shaun Keaveny on 6Music. I didn’t think it was possible to listen to that much Rolf Harris.

But while she loves it, it’s not without its faults. It’s easy for her to use, with its big buttons on top that give her control over the important bits. But since she’s quite capable of finding all the little switches on the bottom too, the parental controls are totally useless. She’s always changing the settings herself, fiddling with the switches, turning on the nightlight and wondering why it’s no longer working (answer: she’s switched off the power again). All those enticing little switches should have been hidden away with the USB key, under the plastic casing.

It runs out of battery pretty quickly (the box promises five hours but we’ve found it runs out after about an hour, possibly because of all the tune skipping and button fiddling) and you can’t use it while it’s charging. This means regular pit-stops at the power point while my daughter asks repeatedly if it’s charged yet.

This may look like yet another bit of plastic for your child’s life, but the Baby Zoo Music Player isn’t a fly-by-night toy that will fall out of favour quickly. It’s something my daughter really enjoys having (possibly because she literally cannot hear Nelly the Elephant often enough) and something I suspect she’s going to love for some time to come.