There’s a constant war of attrition going on between me and my extensive range of body hair.

If I’m not epilating, waxing or shaving, I’m probably just leaving it all to lie fallow in the hope that a sudden gust of wind won’t reveal the thermal layer of leg hair hidden under my maxi dress.

But could it be that the E>One from E-Swin holds the key to near-constant leg loveliness?

Yes, it could — though you might need to take out a mortgage to acquire one…

Using the wonders of IPL lasers, the E>One sends a flash of hair-quelling light straight onto your follicles. The hair doesn’t return for a good few weeks, after which it is cowed and craven and more than happy to rethink its decision to sprout in inconvenient locations all over your body.

I had the E>One for quite a few weeks, but I only got round to testing it out once. I was really impressed with the results even after that initial use. The hair returned reluctantly, and in smaller numbers; I wouldn’t be surprised to see it moving on for good if I had that opportunity to give it a few more sessions.

So why did I only test it once in all the time I had it?

Well, hair removal is never a barrel of giggles at the best of times, but at least I can usually distract myself with something on TV. Because the light is not safe for human eyeballs, you have to wear special goggles while doing it. That means you’d also have to make everyone in the room with you wear special goggles. So TV isn’t really an option (and anyway, everything will look yellow through your sexy plastic lab specs).

There’s also a fair amount of mess to be made. You’ll need to squeeze gel all over your leg — the same sort of gel you get doused in when having an ultrasound — and you’ll also need ample space for the fairly large unit. Oh, and if you’ve got moles, you’ll be spending some time covering them over with the stickers provided.

That said, there’s still considerably less paraphernalia than you need for waxing. 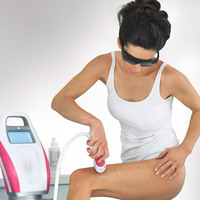 Although the light flashes can prickle (and get increasingly close to feeling like electric shocks as you turn up the intensity), they’re a walk in the park if you’re used to waxing or epilating.

You can alter the settings for skin colour and hair thickness (unlike most other units, it works on tanned and brown skin, but it’s not suitable for black skin types). It’s not a particularly easy set up, with a thick book of instructions to plough through before you can unleash the light.

Once you’ve got it set how you need it, however, it’s plain sailing from there on. In fact, all you need to do is make your way around your (freshly shaven) hairy areas and wait a few days for the growing hair falls out.  until the hair makes its patchy recovery (around five weeks if your hair is feisty like mine, up to nine weeks if you’ve got bashful follicles).

Skip to the end

The E>One is a lot faster to use than units like the iPulse Smooth Skin because its light panel is about twice the size. The strength of the laser means it’s also the only unit available that promises near-permanent hair removal after around 10 uses (after that, you’ll need to use it a couple of times a year).

I would love to give this system an unequivocal thumbs up. I really wasn’t expecting to be so impressed, but it really did feel like the solution to all my hair-related problems.

That is A LOT of money. And since E-Swin reckons you’ll only need to use it about ten times before you’re body-bald for life, the cost-per-use isn’t great either. You can’t even make it sound all that reasonable if you add up the money you might spend over a lifetime on self-waxing (although it will save money in the long run if you pay for waxing).

The only solution to this problem is group purchase. Club together with friends, buy yourself a unit, share it round and once you’ve all done your ten sessions, start renting it out to any hirsute acquaintances.

You can buy the E>One direct from E-Swin, (payment options let you pay by instalment).