You are here: Home / Featured / Google Android: All the newest phones 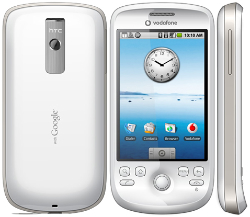 Since the Apple vs Android war has officially kicked off, I’d like to pledge my allegiance to Android. I’ve yet to get my paws on the newest generation of phones, but I’m an avid Google fan and the idea of buying an iPhone leaves me feeling a little blah.

After checking out what’s currently on offer, and what’s to come, I’m more than a little excited.

The HTC Magic (right) sits at the more aesthetically pleasing end of the Android scale.  The HTC was the second offering from the Google Android market after the T-Mobile G1, and the improvements show.

It’s much slimmer than the G1 thanks to the removal of the QWERTY keyboard, and general reports seem to indicate a system with far more usability.

TC are dominating the Android market at the moment. Their latest offering, the HTC Hero, is professional-looking and stylish enough to face up against Apple’s iPhone.

Following in the footsteps of the Magic and the G1, it features that ‘chin’ at the bottom that seems to be bit of a Marmite feature. The Hero’s camera is the big difference between this handset and the others, boasting a high quality 5-megapixel camera.

The search feature is a nice touch too, allowing you to search through tweets, e-mails and messages. 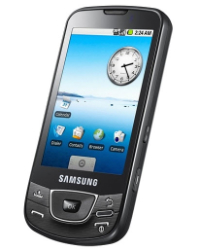 Samsung have recently entered the Android market with the Galaxy i7500 (right), currently exclusive to O2. Measuring just under 12mm, it’s a skinny handset packed full of features and widgets.

There have been some complaints of slow reactions on the touch screen, and a lack of customisability (a common complain with most of the Android handsets), but overall it seems to have strong reviews.

I’ll be interested to see what the recently announced i6500 Saturn will bring to the table, and whether it will fix the buggy screen. 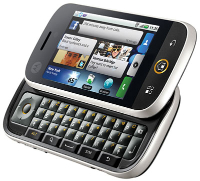 The Motorola Dext (left) reverts to the old QWERTY keyboard, much to my fat-thumbed glee. An Android aimed at social networking fans, the handset boasts the Motoblur function to make keeping in touch even easier.

Whilst this initially wooed me, the news that it’s currently only available on Orange was a massive turn off. Rubbish signal and sitting on the phone to customer services for hours is not an appealing feature.

Sony Ericsson have finally entered the market too with the Xperia X10, the first of many headsets that will be appearing in early 2010.  The handset includes a wireless stereo headset, 8.1 megapixels camera and a features called Timescape which holds all your communication for one person in one place. So in theory you can browse the texts, e-mails, tweets and facebook messages of one person at a single click. 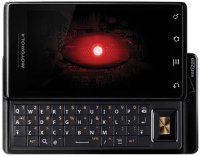 The phone everyone is really waiting for though, is the Motorola Droid. This smartphone features a huge screen, 5-megapixel camera, and a free GPS system powered by Google.

The system is reported to be ultra fast, and many are comparing it to the iPhone for its performance.

With news of several more handsets in the works from Archos and NVIDIA, 2010 should be a very good year for Android.