You are here: Home / Film + TV / A WWBW Special: The iPlayer relaunch and an event TV renaissance… 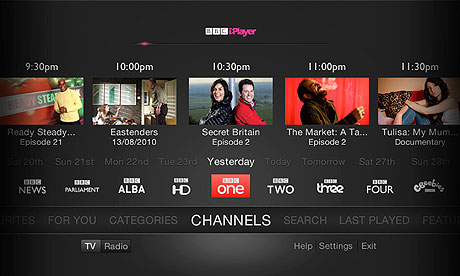 In the last couple of days, the BBC has relaunched its hugely, bandwith affectingly successful iPlayer, with a particular eye on the service being used on games consoles like the PS3, and – perhaps most importantly of all – smart TVs. So with a whole archive of programming available on more and more platforms, at any time, surely the good old days of event or appointment TV are over? Perhaps not – and in fact, the internet itself could be its saviour.

If you’re one of the, I would estimate millions who follow the What We’ve Been Watching column with keen interest, you will be aware that I am a huge fan of event TV – that’s TV that you just have to watch as it goes out live, be it a sporting or news event, a big series finale, a reality show or, you know, Springwatch.

It would be reasonable to assume then, that I would not be much of a fan of services like the BBC iPlayer, or Channel 4’s even more comprehensive 4oD, as they disperse the audience — why should millions stay in to watch the final episode of Doctor Who on a Saturday night when they can just catch up later at a more convenient time?

But that’s not actually the case — they mean I can watch Spaced without even having to bother finding the DVD for a start, and for that I will be forever grateful. But more than that, I’m happy they exist because not only are they a massively useful service in themselves, I don’t actually see them having any negative impact on the event TV that I so enjoy.

And that’s because whatever impact they are having is actually being offset by another corner of the internet: social media.

Twitter in particular makes event TV a hell of a lot more fun than it’s ever been because it actually connects you with that huge audience who have similarly chosen to spend their evening in front of the telly.

I didn’t even take much of an interest in the ITV juggernaut The X-Factor, for example, until my feed became filled with reaction to it, but now I can’t wait for the new series to begin! And that’s purely down to the fact that I know that I’m guaranteed three months’ worth of Saturday nights filled with witty, laugh out loud commentary.

Eurovision, the football World Cup, #piegate, the words ‘Let’s Kill Hitler’ flashing up on the screen: these are all televisual events that have been exponentially enhanced by social media. And while there are enough people that agree with me that keeping a social media feed open is a fun way to watch telly, event TV will endure irrespective of the advances made in catch-up services.