Finnish developers Kukouri have teamed up with Chillingo to give us Tiny Troopers, a game that seems unashamedly influenced by Sensible Software’s 1993 classic Cannon Fodder.

Even the tagline “Give war a chance” seems like a blatant take on Cannon Fodder’s classic theme tune. Drawing inspiration from awesome games of yesteryear is fine, but is this a successful homage to a multi award-winning title, or is it a total misfire? 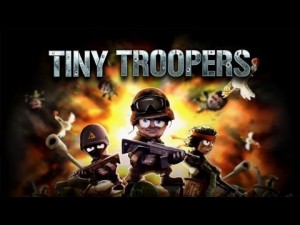 You guide your miniature militia through thirty levels of combat, with each mission taking place in an enclosed map with objectives ranging from search and destroy, rescue operations, and even plain old survival.

Controlling your men is a piece of cake – it’s true to the genres typical point-and-click standard – simply tap where you want the troops to move and then watch them go.

Combat is done in the same way, tapping an enemy soldier or vehicle targets and orders your men to open fire, with additional drag and drop controls used for special weapons. It’s an intuitive system which will have you mowing down your enemies like a pixellated John Rambo in no time. 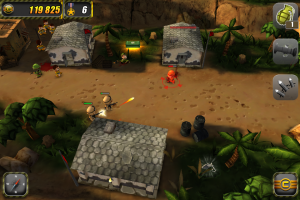 Pre-mission briefs give an opportunity to stock pile on weapons and skill bonuses like extra health or improved range. These are bought using Command Points (Tiny Troopers’ currency) that you earn by completing missions.

As you progress you get to unlock specialist soldiers too, which come pre-equipped with extra weapons, including grenades, bazookas, and air strikes. Weapons can also be mid-mission via the pause menu, so if you’ve misjudged a level and found yourself in a tight spot you can simply get some hardware air-dropped in.

Typically to market trend, extra Command Points can be bought with real money too to help speed up proceedings or restock your virtual wallet in case you’ve been a bit too frivolous with your Command Points.

The graphics are nice and crisp with some lovely animation. You can zoom in closer to your troopers should you wish with pinch controls, but other than aesthetics this serves no use whatsoever; it’s not uncommon to be getting shot from an off-screen assailant with the standard wide view; zooming just makes every enemy an unseen surprise. 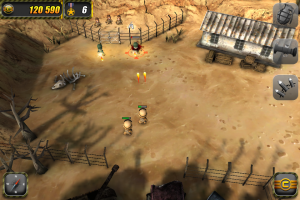 Troopers gain experience over levels and will rank up, each rank delivering increased abilities. However, if they are killed in action that’s it: they’re dead, and you will have a fresh trooper in place on your next outing. It’s a nice idea for Kukouri to employ, but ultimately it doesn’t affect proceedings because it fails to capture the same sense of loss that made Cannon Fodder so heart wrenching.

Mention the names Jools and Jops to any gamer over the age of 25 and watch their eyes glaze over with a vacant mid-distant stare as they internally re-live the horrors of war.

Currently only the main mode is available to play, with a level select mode on the side to let you play back missions individually. A zombie survival mode (Hurrah! More originality!) is on the way soon, which will be a welcome if not passé addition to the game. 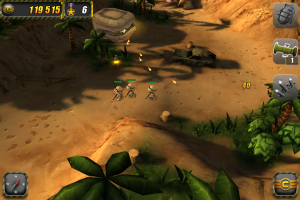 Despite its unapologetic similarities to Cannon Fodder, Tiny Troopers remains a top game and one that’s easy to recommend.

It’s fun, simple to pick up and play, and will last you long enough to warrant the whopping 69p you’ll have to part with to get it. For fans, this is the closest thing to Cannon Fodder available. The fact that it is not as good should come as no surprise, but nor should it deter you from downloading it now.

Tiny Troopers is out now for iOS, and will be available for Android, PC, and Mac Q3 this year.