You are here: Home / Featured / The best free apps for your BlackBerry 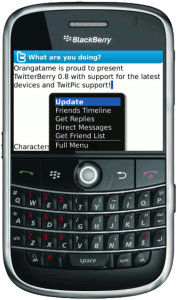 It’s time to supe up your BlackBerry with the best free apps and software available. Here’s our must-have apps list…

I was wittering away on Twitter the other day about my thrilling night of BlackBerry app downloadage and a few people made enquiries about which apps I recommended.

Rather than politely answer their tweets, I thought I’d save my response for an article on Dork Adore. That way, there’s a slim chance it might do well in Google search results and I might stand to gain a few pence in ad revenue.

Before you start composing letters of complaint to your MP, not everything here is an “app”. But if you’ve just got yourself a new BlackBerry and you want to supe it up, here’s what I would do.

The browser on my BlackBerry is OK, but Opera Mini is much better. It looks nicer, it’s faster and it has excellent shortcuts that make browsing on a BB much faster. 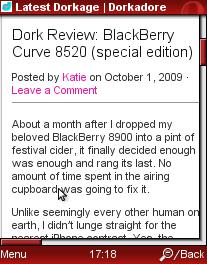 I’m currently testing Opera Mini 5 and it’s making me all confuddled. But version 4.2 works like a treat.

I hardly go on Facebook any more, but the BlackBerry app is handy for letting me know if I’ve missed a message from someone.

The latest version syncs up with your calendar and contacts, flashing up the latest profile photo of your friends when they call and reminding you that it’s someone you once met at a party’s birthday.

Watch this brainwashing video. It worked on me:

The latest version is a vast improvement on the old one. You can now actually retweet people and view people’s user profiles. It’s like a modern day miracle.

Just make sure you delete the cache every once in a while or it starts to get pissy.

My Outlook’s connected to my Google Calendar. My Google Calendar’s connected to my BlackBerry. The only time I do a manual sync with my PC is when I want to update my contacts. I tried using Google to synchronise contacts and it just kept making duplicate entries until I lost the will to live. It’s a bug. Presumably, it will be fixed at some point, but I haven’t had the energy to try again for a while.

This is OK, but I don’t use mine much. Handy for getting your reader, Gmail and other Google goodness all in one place.

I don’t use this eBook reader very often now I don’t commute into London every day. But for a while there it was handy for reading Little Dorrit when I wanted to know what was going to happen in next week’s episode on TV.

Skype isn’t yet available for my BlackBerry, but iSkoot will fill in for the time being.

I don’t use it as much as I used to when I needed to IM colleagues: it sucks up battery life and spends a lot of time trying to connect. Some days it works beautifully and other days it can’t find its backside with both hands.

And the rest (on App World):

Buzz Me: Makes your BlackBerry vibrate and ring at the same time.

Quick Pull Pro: Used to be free, but now costs £2.15, this app performs a hard reset to regain memory so you don’t have to remove your battery. It has lots of clever scheduling options (eg you can set it to reset at specific times or when memory starts running low). It’s handy for keeping your BB running smoothly.